Three Teams, One Cause AC Hosting Coaches vs. Cancer Day on Saturday

A full day of Angelina College athletics action will go toward a worthy cause, as AC’s basketball and baseball teams will host their annual Coaches vs. Cancer Day on Saturday, February 27.

All proceeds, including those generated through AC’s Relay for Life campaign, will go toward the Lufkin chapter of the American Cancer Society.

The Roadrunner baseball team will off the day’s proceedings with a doubleheader against McLennan College starting at 1 p.m. at Roadrunner Field. The ‘Runners have scored 12 or more runs in three of their past four wins.

The basketball teams will also recognize Sophomore Day for those players moving on next season.

Both the Lady ‘Runners and Roadrunner basketball squads are battling for final seeding in the upcoming Region XIV Conference Championship Tournament scheduled to open on Tuesday, March 1 at Shands Gymnasium. The winner of the tournament advances to the national championships in Lubbock (women) and in Hutchinson, Kansas (men).

The Roadrunners (17-11, 10-8) are tied for fourth place in the conference’s South Zone, trailing Jacksonville College by a single game. Lamar State-PA’s Seahawks currently lead the zone with a 13-5 record in league play. Both basketball games will be available via live streaming at roadrunnerslive.com. 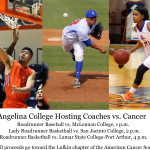