Stephen Lang In Beyond Glory At Temple Theater Nov. 23

Some stories should not be forgotten.

Stephen Lang, award winning playwright, stage and screen star, brings the stories of eight different men to the stage in a one-man show that will reach into your very soul and keep you thoroughly spellbound. BEYOND GLORY, adapted from Larry Smith’s stirring book will be live on-stage at the Temple Theater Monday November 23rd at 7:30 pm. BEYOND GLORY presents the stories of eight veterans from World War II, Korea, and Vietnam, rendering first-hand accounts of valor which resulted in the nation’s highest military award, the Medal of Honor. Parental Guidance is recommended due to strong language and mature themes. Tickets are on sale now and range from $27-$35 (Premium/Box $40). All veterans and members of the armed forces are eligible for a 20% discount by calling the Temple Theater box office. Angelina Arts Alliance presents BEYOND GLORY along with show sponsor Angelina Radiation Oncology Associates. 2015-2016 15th Anniversary Season sponsors are Georgia Pacific and CHI St. Luke’s Health Memorial. 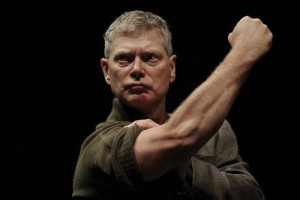 Commended for film portrayals of Babe Ruth to Stonewall Jackson to AVATAR’s Col. Quaritch, Lang began his career on Broadway and maintained a managing role at the Actor’s Theatre.  It is through Lang’s stage adaptation of Beyond Glory that he has reached his most memorable, his most brilliant work.  After a celebrated run on Broadway and in Chicago’s Goodman Theater Lang is now takes BEYOND GLORY coast to coast. As a tribute to fallen soldiers, Lang performed the show on military bases, and gave a command performance on the floor of Congress with Medal of Honor recipient Senator Daniel Inouye of Hawaii in attendance.

The oral histories of these eight men are brought to life through Lang’s commanding performance, with a backdrop of video screens which occasionally evoke the turmoil of combat. Lang subtly moves through each man’s story with a slight alteration of posture and vocal coloring to suggest a new personality.  This illusory magic suggests the magnitude of this performer, the brilliance of his talent that will light up the stage with one of the most memorable presentations you may ever experience.

A reception honoring all veterans, armed service members and their families will begin at 6 pm in the Temple Theater lobby sponsored and staffed by AC SPEAKS, an Angelina College student service organization. Military artifacts and mementos on loan from Veterans of Foreign Wars Post 1836 and others will be on display in the theater lobby.

For more information and to purchase tickets visit the Temple Theater Box Office on the Angelina College Lufkin campus, Monday through Friday 11 am – 5 pm or call (936) 633-5454, or go online at  HYPERLINK “http://www.angelinaarts.org/” www.angelinaarts.org . Details and video clips from the entire season are on the Arts Alliance website. Follow Angelina Arts Alliance on Facebook for late-breaking news, photos, videos and ticket giveaways.S