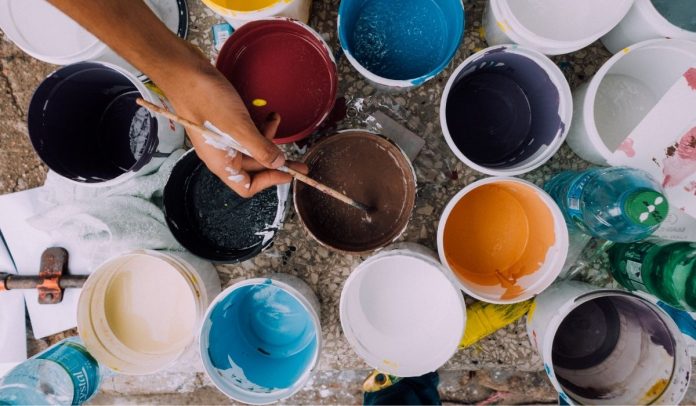 Their “pop up” show, which features work from a graduate seminar, takes up the ground floor Ledbetter Gallery and the Hallway gallery space on the second floor, and selected works by SFA filmmaking students can be viewed in the upstairs Reavley Gallery. The SFA art students have called their exhibition “Collected” to reflect its character as a group effort.

“The word ‘collected’ here takes on both the basic dictionary meaning ‘gathered together’ and the implied meaning of being emotionally collected, that is, ‘to be calm and composed through concentrated effort,’” said Dr. David Lewis, professor of art history at SFA.

“The title well reflects the cooperative nature of their joint activities in putting the show together within an unusually short time frame,” Lewis added. “The exhibition did come together quickly: it had to, and these emerging artists were up to the challenge.”

The show represents a broad range of styles and media, including painting, sculpture, printmaking, digital media and film, and it offers an introduction to some of the larger ideas, issues and media that represent current trends in the visual arts.

Among the works are digital prints by Kendra Brown, including “Fan Favorite,” which playfully uses quilt patterns; large, imposing sculptures in mixed media by Kailan Counahan, such as “The Lines we Walked …,” composed of nylon, wood, nails and thread; and charcoal drawings by Lindsey Creel portraying forms suggesting crumpled paper or cloth, including “Hivemind.” Elizabeth P. Fontenot contributes oil painting, watercolor and prints in various media, with titles such as “Shelter in Place,” reflecting the events of recent times. Work in ceramics is represented by Homero Gutierrez with the whimsically titled “Hare Season.” Jessica Gryder contributes photography and digital media works like “Exaggerated Spin.” Working in a graffiti art style reminiscent of Basquiat, Weelynd McMullan shows mixed media paintings and drawings. “Always Watching” and other digital works by Charles G. Oliveri create dynamic optical effects; and the oil paintings of Travis Walthall portray eerily surreal images of mysterious workers in Hazmat suits cleaning up disaster areas. The film selection includes shorts ranging from 45 seconds to five minutes: “A Siren’s Lullaby” and “Fragmented” by Calvin Henson Jr. and “The Calm Interrupted V3” by Oliveri.

The exhibition continues through June 12.