Family Day at the Museum of East Texas

You’ve been wrapping your presents wrong? Check this VIDEO out! 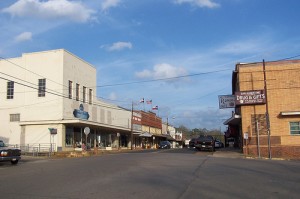 The ceremony marked the town for preservation and the 84th member of the state organization of towns across Texas whose revitalization will be funded by the Texas Historical Commission.

The announcement also means the small town will retain its quality of life as well as help preserve its history for coming generations. The designation is one of three for the state so far this year. Other towns designated for the program include Cuero and Childress.

“We are looking forward to revitalizing our downtown area, one of the oldest and historic in the state,” she said. “We hope the designation will help us preserve our history while assisting with the redevelopment of our city.”

Perry presented the city with architectural renderings of what downtown San Augustine could look like, depicting the renovations of old buildings, including the one where Sam Houston first opened a law office in the 1830s.

The history of San Augustine runs deep. It is the county seat of San Augustine County. The railroad runs through the small town that sits 32 miles east of Nacogdoches.  It was first inhabited in the 1540s by the Indians. Another 150 years would pass before the French traders would arrive and set up a village.

The town was active in the Texas Revolution but in 1836, when Houston was elected to lead the Texan forces at San Augustine, it was all but abandoned during the battle of Runaway Scrape. Citizens returned home after the battle of San Jacinto was won. It began to grow and in 1837, the city incorporated and the townspeople elected a sheriff, a clerk, a judge, a surveyor and a coroner.

Time has taken its toll on some of the old buildings, with many of them dating back to those early town days. With the city being named by Perry as a Texas Main Street City, new growth and prosperity could be just around the corner. Mayor Leroy Hughes has high hopes for just that.

“We can do things that are in accordance to the things that we want, just like larger cities can,” he said.

With the most recent courthouse renovations, the city plans to expand the improvements to all of main street and downtown. Cox said the support the city will receive from the designation as a Texas Main Street City will help make that happen. “Businesses are A-1, number one important,” she said. “They will be here to support us to make changes in the buildings.”

In the past 30 years, according to the historical commission website, the Texas Main Street City program has helped generate $2.6 billion in economic reinvestment and helped create more than 7,400 jobs. The communities, towns and cities that are a part of the program are diverse and range from the very smallest to large urban areas. The population in the selected cities is more than 2.5 million.

The program is designed to partner with organization-based plans for successful preservation that lends to a healthy downtown environment, promoting and helping to sustain new and existing businesses.

With the unique physical assets of downtown San Augustine, its heritage and current preservation efforts, the renovations and revitalization will help revamp and restore the current historical structures, and will work to update the charm and appeal that the city’s downtown area offers.

As the changes occur, the economic restructuring will also become evident in San Augustine. Through proper leadership, the program will help develop new markets of opportunity and find new uses for those old historical buildings. When that occurs, the residents of San Augustine can expect to see new growth and a better economy in this proud, historical Texas Main Street City.

For more information about the designation as a Texas Main Street City, visit www.thc.state.tx.us/preserve/projects-and-programs/texas-main-street. For information on what is happening in San Augustine, visit www.sanaugustinetx.com/.