First place in the conference standings was so close they could taste it.

On Wednesday, the Angelina College Roadrunners could savor the big bite they took edging them closer to the top of the standings.

Kahari Beaufort scored 11 points in the game’s first five minutes and finished with 38 for the night in leading AC to a 102-89 win over the first-place San Jacinto College Ravens at Shands Gymnasium.

The win pushed AC’s conference record to 10-7 and dropped San Jac to 10-6, leaving the Roadrunners a mere half game out of first place in the conference’s South Zone.

In Athens, the Lady Roadrunners fell to the No. 1-ranked Trinity Valley Lady Cardinals by a 91-71 score.

Shane Temara added 22 points and 13 rebounds; the Syracuse, New York sophomore is averaging double figures in scoring and rebounds over his past 10 games. Corinthian Ramsey finished with 14 points – including a trio of three pointers in a one-minute, first-half span – and seven assists; and Gary Blackston chipped in 12 points, six rebounds and four assists.

San Jac’s Corey Davis went 9-for-9 from the free-throw line to lead the Ravens with 24 points. Josh Huntley added 16 points in the loss.

Beaufort and Ramsey teamed up to score every one of AC’s points in the Roadrunners’ 14-2 run to close out the first half. Zach Shepherd’s three with 9:44 to play in the game gave AC a 17-point lead, but the Ravens rallied to cut the lead to five points at the 4:58 mark on a Davis free throw.

But Blackston dropped in a couple of free throws, Ramsey hit a layup and a three pointer and Temara hit a short jumper to fuel a 10-2 AC run to close out the game.

The Roadrunners (17-10, 10-7) travel to Blinn College on Saturday, with tipoff scheduled for 4 p.m. The Lady Roadrunners will take on Blinn’s Lady Bucs at 2 p.m. 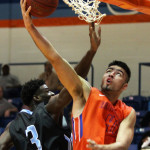 Kahari Beaufort (22) of Angelina College hits a reverse layup around San Jacinto’s Iker Er during Wednesday’s game at Shands Gymnasium. Beaufort scored a game-high 38 points to lead the Roadrunners to a 102-89 win and a share of first place in the conference’s South Zone. (AC Press photo by Lemuel Roberson)

Angelina College’s Shane Temara (41) goes off the backboard against San Jacinto’s Candido Sa during Wednesday’s game at Shands Gymnasium. The Roadrunners beat the first-place Ravens 102-89 to grab a share of first place in the conference’s South Zone. (AC Press photo by Lemuel Roberson)