Momentum changed jerseys twice in the final 10 minutes, with the last switch leaving the Angelina College Roadrunners shocked – and eliminated.

After clawing their way back from an 11-point deficit and taking the lead with a late, 15-4 run, the Roadrunners watched in disbelief as San Jacinto’s Donovan Greer hit a three-pointer with 1:02 to play for a 74-73 Raven lead. Greer and Corey Davis then would hit four free throws in the remaining few seconds to lift San Jacinto to a 78-75 win in Thursday’s Region XIV Conference Tournament quarterfinals, knocking the ‘Runners out of the post-season.

The game seemed to work against the Roadrunners from early on, with leading scorer Corinthian Ramsey battling foul trouble all game long – he’d foul out with six full minutes to play – and Kahari Beaufort hobbling on a sore knee. Ramsey and Beaufort averaged nearly 40 points between them throughout the season; on Thursday, they combined for just 15.

Shane Temara, fighting against the Ravens’ longer front line, nevertheless yanked down 11 rebounds to go with his five points.

The Ravens will face No. 1-ranked Trinity Valley at 1 p.m. in Friday’s semifinals. 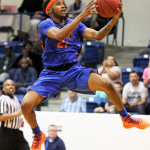 Angelina College’s Gary Blackston (21) glides toward the rim during Thursday’s Region XIV quarterfinal game against San Jacinto. The Roadrunners bowed out of the tournament in 78-75 loss to the Ravens. (AC Press photo by DeShun Pham-Adams)

Kahari Beaufort (22) of Angelina College attempts to shoot over San Jacinto’s Candido Sa (3) during Thursday’s Region XIV quarterfinal game against San Jacinto. The Roadrunners bowed out of the tournament in 78-75 loss to the Ravens. (AC Press photo by DeShun Pham-Adams