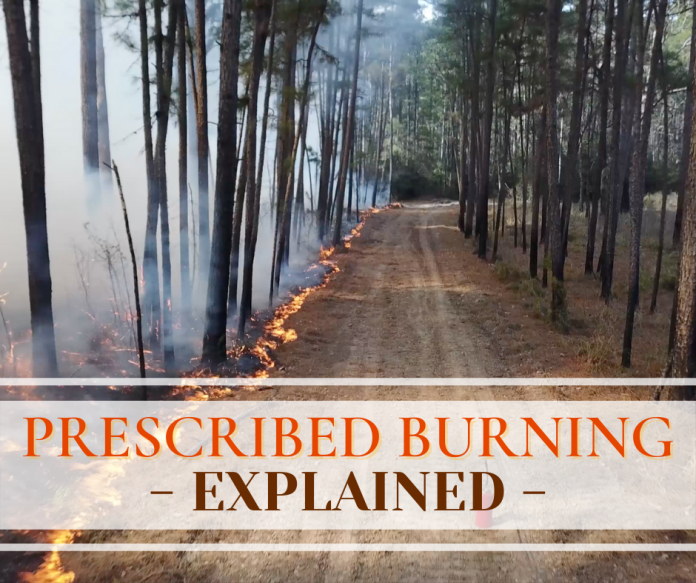 When Texans see a pillar of smoke rising out of a forest or state park, our gut instinct is always the same: wildfire. However, that isn’t always the case.

Prescribed burning has become one of the most efficient and effective tools for land management in the state of Texas, and some of the state’s leading experts in wildland fire management—from Texas A&M Forest Service to the Texas Parks and Wildlife Department—can’t emphasize its merits enough.

Eliminating some of this excess “fuel” reduces the risk and severity of potential wildfires. If there’s not enough brush or grass on the ground for a fire to feed on, it won’t get as hot or as big, and it’s less likely for the flames to reach the canopy of more established trees. It can also help slow down a raging wildfire, giving Texas A&M Forest Service and local firefighters a better shot at containment.

It feels counter-intuitive to light a fire in dry, burnable conditions, and many Texans believe that humans should simply “get out of the way” and let nature run its course, but the result would mean disbanding fire suppression all together. Since fire suppression has been integral to the establishment and upkeep of communities across Texas, one of the main issues facing wildland fire management is the build-up of fuels from about a hundred years of unnatural fire suppression.

“For a long time, we excluded fire,” said Chris Schenck, the State Fire Program Leader for the wildlife division of Texas Parks and Wildlife. “At the turn of the 20th century, we looked at fighting fires as almost the moral equivalent of war.”

In fact, one of the earliest laws in Texas prohibited the burning of grass. People didn’t realize that fire is a natural part of the Texas landscape. Before Texas was fully settled, lightning would strike in the heart of an eastern pine forest—or on the grassy plains of the Panhandle—and spark a fire to sweep across the land, purging it of invasive species, diseases and unwanted undergrowth.It was an essential element that helped uphold the natural balance.

“Native Americans recognized the importance of fire in their environment,” said Murnane. “They would often intentionally light fires to create a better habitat for hunting or browsing of wildlife species.”

East Texas is what Murnane calls a “fire-dependent ecosystem,” and the wall of understory brush – namely yaupon, sweetgum, Chinese tallow and other invasive species – is unnatural. Because of the lack of fire suppression by humans, east Texas used to look more like a pine meadow or savannah, with beautiful open spaces filled with green grasses and wildflowers between the trees. And while that kind of environment is visually pleasing and aesthetic to us, it’s also attractive to wildlife.

“One of the immediate positive results of any prescribed fire is forage production and habitat improvement,” said Schenck. “Better feed means better care and capacity for the land, and therefore greater diversity of species, both wild and domestic.”

Wildlife depends on open space and healthy plant life for foraging – including grasses, fruits, seeds and other vegetation – and out of the ashes of a prescribed fire rises healthy new plants. The trick, it seems, is to avoid fully incinerating the brush.

“Depending on the fire’s intensity, the ash produced following a burn can be full of valuable nutrients,” said Mike Lloyd, a Wildland Fire Manager with Texas State Parks.

Prescribed burning breaks down the chemical composition of organic matter, recycling nutrients back into the soil. According to THIS STUDY by Leonard F. DeBano, some of those nutrients are “volatilized” or lost, but most are made more readily available to plants and native organisms. The fire acts as a mineralizing agent, making nutrients immediately accessible, instead of being gradually recycled over the span of years, or even decades, via decomposition.

Even for us, fire (heat) can make an otherwise inedible substance not only palatable, but more nutritious. Cooking anything too long, however, can leave it charred, vaporizing its nutrients. In the case of forest management, the most endangered element is nitrogen. If a wildfire burns off too much nitrogen, it can adversely affect a wildland ecosystem for decades.

“It’s extremely weather dependent,” said Murnane. “The winds, the direction of your winds, your mixing heights, what your fuel moisture is at, all sorts of different things, and all of this comes back to the prescribed burn plans that we’re required to write.”

Once a burn plan is in place – which can be written and approved by Texas A&M Forest Service up to six months in advance – foresters look for an ideal weather window to conduct their burn. These usually occur between November and March, during the dormant season. Then it has to be a clear-skies day to help with smoke dispersal, and the winds have to be no less than 5 mph, but no greater than 15 mph. If the winds are too strong it could blow the fire out of control and start an uncontained wildfire, but if the winds are too weak, the fire won’t disperse well and parts of the forest could overheat, burning the roots of trees.

That’s why at the W.G. Jones State Forest prescribed burning requires a lot of preparation, and a lot of boots on the ground.

“We get several firefighters dragging drip torches, and several more on type-6 engines that are ‘holding’ so we don’t have a spread or a spot fire,” said Murnane. “Then we’ve got several bulldozers on standby, just in case.”

While Texas A&M Forest Service has the resources and capacity to take all of these precautions, not many landowners do. That’s why Murnane recommends any landowner interested in conducting a prescribed burn reach out to their local TFS forester or Parks and Wildlife Biologist. According to Murnane, they would be happy to visit the property and give their recommendations. They also have local connections with certified burn vendors that can provide prescribed burning services.

Schenck of Texas Parks and Wildlife even encourages landowners interested in learning how to conduct their own prescribed burns to reach out to their local forester or TPWD Regional Fire Coordinator.

“Because Texas is 95% privately owned, one of our roles is to provide landowners with technical guidance, and the development of a burn plan,” said Schenck. “Then we help them implement it. We teach them how to use their prescribed fire tools, how to prepare their land and how to implement that fire.”

Schenck was a federal wildland firefighter for years, but he still sees a need for prescribed burns across the state. This is, in part, because he’s witnessed the benefits of prescribed burning firsthand: from the clearing and rejuvenation of Wildlife Management Areas, to the survival of forests and structures during the catastrophic wildfires of 2011. In Bastrop, Schenck and Lloyd recall how areas that had received a prescribed burn the year before survived virtually unscathed.

“Believe it or not, prescribed burning saved a lot of the structures in those parks because we had burned the year prior,” said Lloyd. “At the Bastrop state park, I wonder if those cabins would’ve made it if we hadn’t implemented a prescribed burn around them the year before.”

“For Texas to get enough prescribed fires safely on the landscape, it’s going to take a lot of people,” said Schenck. “But if you’re going to light ‘em, you’ve got to know how to fight ‘em.”

If you’re a home or landowner interested in conducting a prescribed burn on your property, visit the PRESCRIBED BURNS page of the Texas A&M Forest Service website or the WILDLAND FIRE MANAGEMENT page by Texas Parks and Wildlife. There’s also this INTERACTIVE MAP to help you determine your eligibility for a Prescribed Fire Grant, with additional information on how to apply HERE.