Hereford’s wit and wisdom focused on passion for good, for employees and for family, beginning with advice he gave to his daughter.  “There are two reasons to pick a career,” he said. “First, in 10 years you’ll be obscenely rich and can quit, or pick something you love so much you’ll do it for free.”

Advice Hereford practiced when starting at age 25 to build his first business. “I looked for things I thought I would be fun,” Hereford said, “and then I built a company around it.”

His practice-what-you-preach philosophy has led to a four-year-old brewing company that has grown by 54% in this past year, a rare find among small businesses which are usually struggling to build a significant base in their toddler years. “I have been so blessed. I’m a really big believer in sharing blessings,” said Hereford. “I think if we are blessed, then it is our obligation to share those blessings.”

His model of sharing began in 1981 with a magazine called Travel Host, which is today in hotel rooms across the United States. Hereford would advertise local businesses for a trade agreement – part cash, part trade. He would then donate the trade to the Rotary club, which eventually lead to the start of an organization that gives scholarships to students who would miss other opportunities. “These students wanted to go to college, were really motivated to go to college, and we would provide the money,” Hereford said. “That program is 19 years old and has helped over 2,000 kids get four-year degrees. Most are the first people in their family to go to college.” 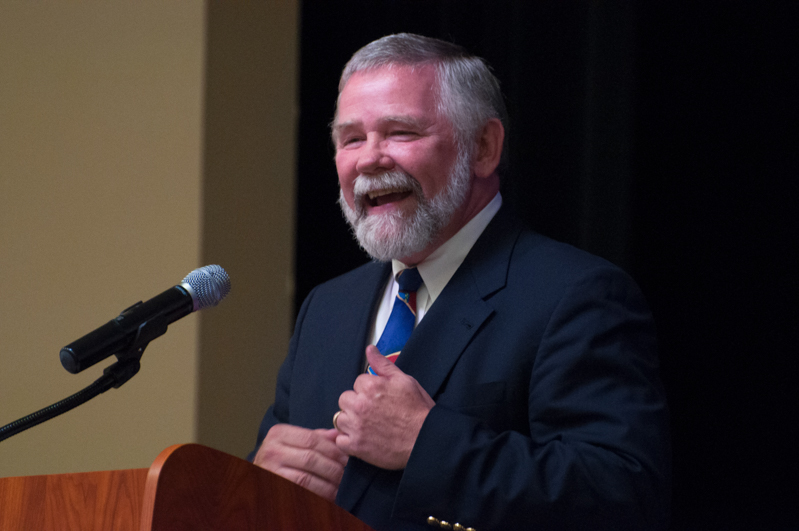 “The hardest job in the company is being the boss, if you’re a really good boss,” Hereford said. “If you are the kind of leader that’s ready to charge the machine gun nest, and you say, ‘Come on, guys, let’s run fast. I’m going to be running fast,’ they’ll follow you to the gates of hell. But if you sitting back in the back, ‘I’m going to finish my sandwich. I’ll be up there after y’all get the fighting done,’ you’re not ever going to have a good team. You’ve got to lead from the front, always.”

With seven brews that have garnered nine gold medals, four silver, and two bronze within the first three years of operation, Hereford knows what he is talking about. He owes much of the success of Pedernales to Brewmaster Peter MacFarlane. MacFarlane is a graduate of the Seibel Institute and has earned a Master’s Degree in Fermentation Sciences.

“Hire the best people you can find and pay them all that you can,” Hereford said. “People don’t leave companies if they feel appreciated. If you can’t pay them, appreciate them. Let your folks know that you are glad they work for you, and they will stay with you.”

Hereford wrapped up with what he believed to be the most important passion: family. “Somehow, someway, we’ve got to find time to bring our family into the blend here,” he said.

“We’ve got to have the same passion for growing our families that we do for growing our business. This stuff we get so wrapped up about isn’t going to matter in 100 years, 10 years, or even five years. But the impact we have on our families and our employees will. That’s going to last from now on. And if we’re teaching them good stuff, and they’re teaching it to their kids, and they’re teaching it to their kids, then we can go to our rest knowing we left this country better than we found it, and isn’t that what it should be all about anyway. Leaving the world a little better than we found it?”

A ForesTREE Experience to Remember