Down by 14 points with just under six minutes to play, Angelina College’s Lady Roadrunners staged a furious rally, cutting Blinn College’s lead to three points with 1:23 to play in the contest.

They couldn’t close the gap, however, with the Lady Bucs hitting clutch shots down the stretch to hold off AC 72-67 Saturday at Shands Gymnasium.

Blinn’s Ebony Parker hit a three-point dagger with 1:02 to play, and teammate Ekiya Gray followed up with three free throws in the final 30 seconds to seal the Lady Bucs’ win.

The Lady ‘Runners dug themselves the double-digit deficit hole with an uncharacteristic rash of turnovers: AC lost the ball 21 times, leading to 22 points for Blinn. Much of the credit went to the Lady Buc defenders, who used their interior length to thwart the Lady Roadrunners’ attempts at entry passes in the paint. Blinn’s Penina Faumui swiped three of her team’s nine steals in the game.

Malachi McQueen led AC with 21 points, hitting nine of her 10 free-throw attempts. Caitlyn Lambert battled her way inside for 13 points, and LaNeique Nealey finished with 11 points and 10 rebounds.

Blinn’s Gray led the Lady Bucs with 20 points, with 10 of those coming at the free-throw line. Jeliah Preston’s 19 points all came in the first half; and Ebony Parker shrugged off a slow start to finish with 14 points. Blinn moved to 17-6, 9-4 with the win. 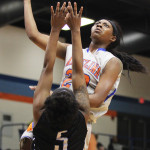