Angelina College’s Lady Roadrunners have split their past four conference games, going 2-2 since January 13. The two wins have come at home, while the two losses occurred on the road against two of the league’s best teams.

On Saturday, the Lady ‘Runners again face off against a good team – and this time it’s on the home floor.

AC will host Blinn College at Shands Gymnasium, where the Lady Roadrunners are 8-3 for the year. With a record of 14-9, 7-6, AC is in fifth place in the standings, just a game and a half behind the third-place Lady Bucs (16-6, 8-4). An AC win, combined with potential losses by San Jacinto and Bossier Parish, could vault the Lady Roadrunners to as high as third or fourth place.

First and foremost, AC will have to get past Blinn College, winners of five straight games. The Lady Bucs boast the league’s second-leading scorer in Ebony Parker, who’s scoring at an 18 points-per game clip. Parker lit up Paris with 27 points on Wednesday.

The Lady ‘Runners will counter with a trio of players averaging in double figures: LaNeique Nealey (13 ppg), Malachi McQueen (11.6 ppg) and Briana Caro (11.1 ppg) figure heavily in the scoring load, but they’ll have help from Caitlyn Lambert (8.7 ppg), Ariel Taylor and Tyanna Barlow. AC’s keys will be slowing Parker while using every player wearing the home uniforms to balance the scoring. The Lady Roadrunners average more than 74 points per contest, while Blinn scores at a 72 points-per-game clip.

Saturday’s game will also kick off a three-game home stand for the Lady Roadrunners as they try to ensure head coach Byron Coleman keeps alive his streak of reaching the conference tournament. Coleman hasn’t missed on the big dance since taking over as AC’s head coach 10 years ago.

Game time on Saturday is 4 p.m. at Shands Gymnasium. The game will be live streamed on roadrunnerslive.com. 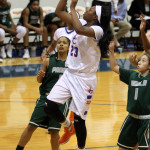 Understanding and Abiding by the Texas Cottage Food Law