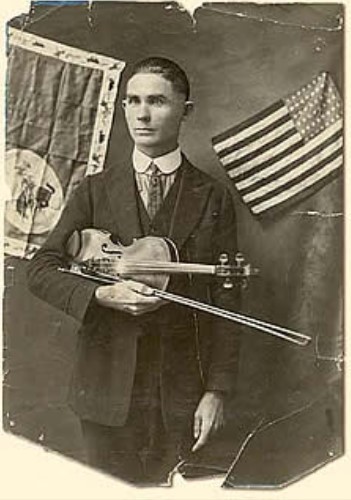 On this day in 1922, legendary Texas fiddler Alexander (Eck) Robertson, along with fiddler Henry C. Gilliland, made what most country music historians consider the first commercial recordings of country music. The duets included the famous “Arkansas Traveler” and “Turkey in the Straw.” The following day, Robertson returned to the studio without Gilliland and recorded six additional tracks solo, including the popular “Sallie Gooden,” as well as two tracks that were never released. The Victor Talking Machine Company issued a limited release of “Arkansas Traveler” and “Sallie Gooden” in September 1922, but not until April 1923 was the disc in wide circulation. Two other recordings of Robertson were released later in 1923 and 1924. Robertson set the trend for future performers, as fourteen Central Texas fiddlers succeeded him by recording commercially in the years shortly following his first recording.

There are additional records of Robertson having recorded other singles with sound companies in Dallas as well, but it is unclear what his sales figures looked to be back at that time.

Robertson died in Borger, Texas in 1975, with his tombstone engraved, “World’s Champion Fiddler.”