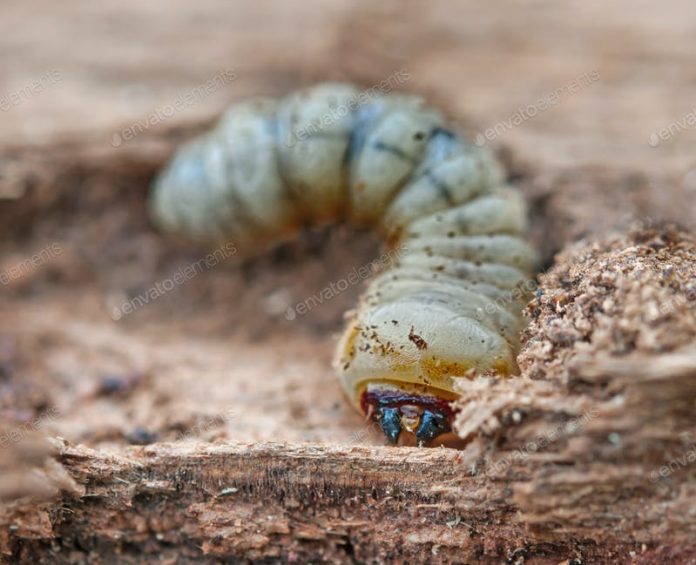 Those ugly white, C-shaped grub worms that infect lawns and cause so much trouble in late summer and early fall are easiest to kill now, when you cannot see them. White grubs are the larval form of the June bug, Phyllophaga crinite, also known as June beetles or May beetles. Just as a caterpillar turns into a butterfly, grubs turn into those clumsy night-flying June bugs.

Grubs eat roots of lawns in addition to several other landscape plants. Grubs pupate and turn into the adult beetles in the late spring. After emerging in the spring, the adult beetles also feed on the leaves of plants as they go about their short-lived life.

Indications of a grub worms are lawns that lose vigor and turn brown. Homeowners will not find distinct zones of affected turfgrass as they will with some fungus problems. Severely damaged turf can be lifted by hand or rolled up from the ground like a carpet. Of course, you will want to do some digging and investigating to confirm they are they culprit.

Looking at their life cycle, adult beetles emerge from the soil in late spring or summer. They fly at night, usually after a significant rainfall or irrigation. Flight periods may last for several weeks, during which time mating and egg-laying occur. Female June bugs that do mate, dig 2 to 5 inches into the soil to lay eggs and each female can lay 30 to 40 eggs.

Within about two weeks the eggs hatch into small white grubs that feed on grass roots. The larvae (gub-worms) continue to grow throughout the year and eventually pupate (intermediate stage between the larva and the adult) and emerge again as another June bug next year in late spring, completing the insect’s development cycle.

Most damage from white grubs occurs during mid-summer to early-fall when the larger larvae are actively feeding. But it is this time of year when you really don’t have much of a problem from the grubs or the beetles that you can break their cycle and reduce numbers safely.

But right now, the eggs have hatched but the larvae are young and easier to kill. The time is now to apply an insecticide.

Some Texas lawns never suffer white grub damage, while others are damaged year after year. If your lawn consistently dies out in patches during late summer and if you can verify that white grubs are the culprits, you may benefit from a preventative treatment.

Several non-chemical treatments are available for controlling white grubs. Beneficial nematodes within the genera Steinernema and Heterorhabditis are tiny worms that attack white grubs and other soil inhabiting insects. These microscopic worms can be purchased in stores or through garden supply

catalogs. Commercial nematode products are usually designed to be mixed with water and applied to lawns using a hose-end or hand-held sprayer.

One microbial pesticide, Bacillus popilliae, or milky spore disease, often is recommended for white grub (Japanese beetle) control in other regions of the U.S. However, it has not been shown to be effective against Texas turf-infesting white grubs.

The insecticides imidacloprid and halofenozide are used most today for white grub control. Imidacloprid is most effective against small and medium-sized grubs but may kill some grubs larger than 1⁄2 inch long. Imidacloprid trade names include Merit®, Bayer Advanced Lawn™ Season Long Grub Control and Scott’s® Grub-Ex®. The lethal effects of the insect growth regulator halofenozide are limited to early white grub life stages.

So, what about the bug-zapper lights? During flights, large numbers of adult beetles, primarily males, may be attracted to lighted windows or other lights at night. Females, being less active fliers, usually are less common around lighted areas than are males. So while you may kill a good many June bugs with a bug-zapper light, their flight tendencies renders many home “bug-light zappers” infective from controlling future infestations.

For this reason, turning off outdoor lights during adult flight periods may not substantially reduce subsequent white grub damage. In fact, heavy white grub infestations often can be found in areas with little or no outdoor lighting.

If you’ve never had a real problem with grub worms, then count yourself blessed and don’t worry about taking action. However, if you have a lawn prone to damages from grubs, consider taking action with one of the remedies listed above.