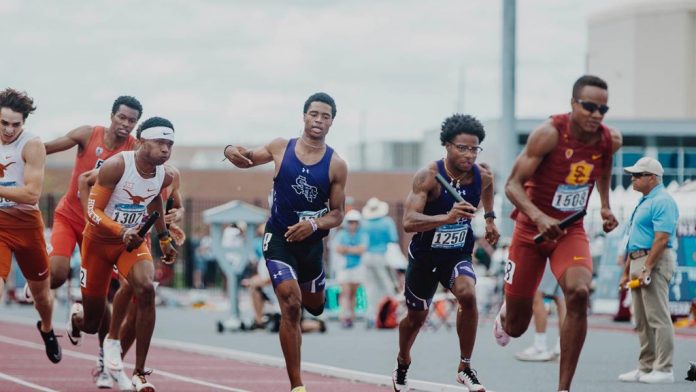 The SFA Track and Field team wrapped up competition at the NCAA West Regional in College Station on Saturday, capping off a successful stretch of competition which saw five individuals and one relay team punch their tickets to Eugene, Oregon next month to compete in the NCAA Championship meet.

SFA’s contingent featured a total of 16 athletes competing in 20 total entries, and represented one of the largest contingents traveling to the NCAA championships in program history.

Three Lumberjack athletes got SFA off to a hot start on the opening day of competition, as Cord Neal, Izac Canchola and Branson Ellis all earned the right to advance in their respective events on Wednesday. Neal finished fourth in the javelin with a distance of 69.99m (229-7), while Canchola took 12th with a mark of 65.10m (213-7). In the men’s pole vault, Branson Ellis had a stellar day, winning the event with a clearance of 5.45m (17-10.5) to earn his way to the championship.

In action on Thursday, pole vaulter Kaylee Bizzell added her name to the travel party for Eugene with a ninth place finish in the vault, clearing 4.17m (13-8.25).

Wrapping up competition on Saturday was freshman Auhmad Robinson earning a berth in the men’s 400m dash with a school record time of 45.61 and a seventh-place finish in the event. Robinson then teamed up with Paul Martin, Muzzuri Mattar and Jeremiah Curry to run a blazing fast 3:04.13 in the 4x400m relay, good for a fifth place finish that earned them a spot in Eugene.