The Gospel According to Scrooge 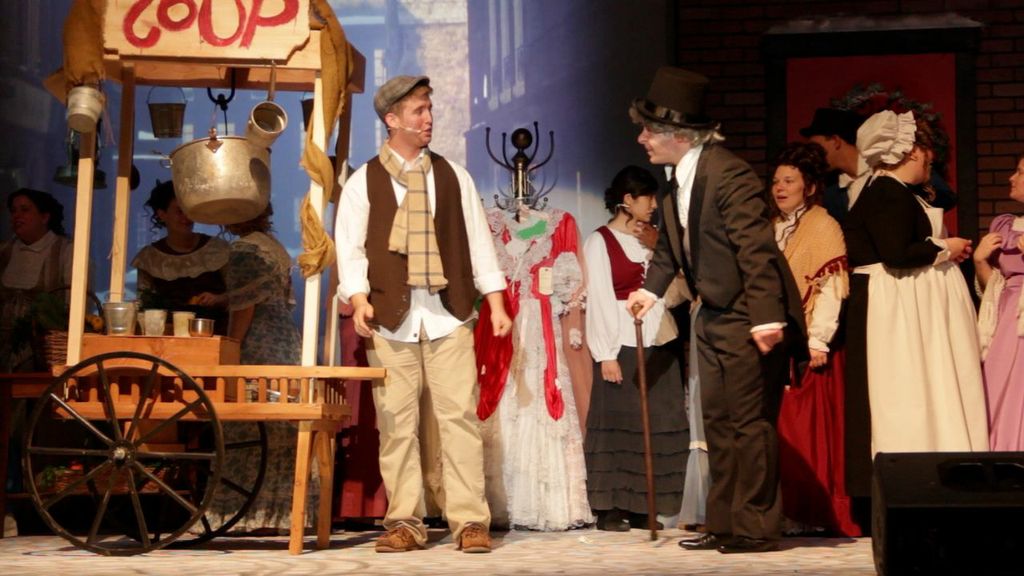 Christmas Eve has come in the year 1850. It is bitterly cold outside, and the snow is blowing. Ebenezer Scrooge, a miserly, old, penny-pinching business man sits at his desk in his office. Too cheap to add a piece of coal to the stove, he hunches over, barely warm enough to keep icicles from forming on his nose. He is counting the only thing that warms his heart—his money. Bob Cratchit, Scrooge’s kind, humble and unappreciated bookkeeper, sits shivering. Half daydreaming, half staring at the clock, his thoughts shift to the start of the holidays—just minutes away.

The countdown begins. For Bob Cratchit, he is moments away from spending the Christmas holidays surrounded by his loving family. For Ebenezer Scrooge, he is moments away from what he thinks will be another uneventful ‘Bah Humbug’ night at home. He will have only himself and his money to keep him company—more than enough companionship for him; or so he thought. Uninvited, angelic guests are about to pay Ebenezer a series of unannounced visits. Scrooge is about to take the life-changing journey of his miserly lifetime, and it won’t cost him a farthing…

‘Tis the season of love, laughter, and one of the most cherished stories of all time! Come join us for this time-honored classic with a spiritual twist, as Ebenezer Scrooge’s heart is opened to the true meaning of Christmas.
“The Gospel According to Scrooge” has become an international phenomenon, but it is a product of a very humble beginning. It was originally conceived as a simpleChristmas production of Jesus People Church. The original script was written in about two weeks, and it contained very little original music. It was first produced in 1977 at The Children’s Theater and The Chanhassen Dinner Theater, both in the Twin Cities area. The cast, crew, and all others involved were amateurs. The two Chanhassen performances sold out, and to the amazement of all involved, hundreds were being turned away at every performance at The Children’s Theater.

Today, “Scrooge” is helping churches reach communities by providing an incredible evangelistic piece that is universally appealing enough to create a non-threatening environment for those who do not know the Lord. This musical has had a powerful impact on the church’s perception of the use of drama. So much that hundreds of churches have produced “Scrooge”, and it has been translated into Spanish and performed in eight countries.