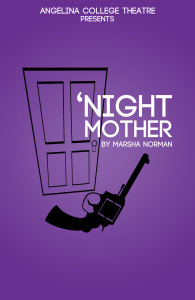 Each show begins at 7:30 p.m. Thursday through Saturday.

AC student/actors Retha Powers (as Thelma Cates) and Kesley Grimes (as Jessie Cates) will present the story of Jessie, a young woman who has decided life is far too complicated and hard to endure. Jessie informs her mother Thelma she intends to end her life. The ensuing dialogue and interaction between the determined Jessie and her helplessly disbelieving mother leads to a story NY Magazine called “…honest, uncompromising, lucid, penetrating, well-written, dramatic, and…unmanipulatively moving…”

Tickets prices are $5 for adults and $4 for seniors, students, and children. For ticket information, contact the Temple Theater Box Office at 936-633-5454.