A month’s worth of scrimmages hardly seems enough to prepare a college basketball for a grueling, four-month season; nevertheless, the Angelina College Lady Roadrunners and Roadrunners are about to embark on the 2015-2016 campaign scheduled to end in March – at the teams’ home digs inside Shands Gymnasium. With the Region XIV conference tournament scheduled to take place at AC, it’s an added mission for the home teams to ensure they’ll be on the floor when the tournament begins.

The drive for the tournament starts this weekend, with the Lady Roadrunners opening the regular season at the McLennan Classic in Waco and the Roadrunners taking part in the East-West Challenge at Collin County College in Plano. 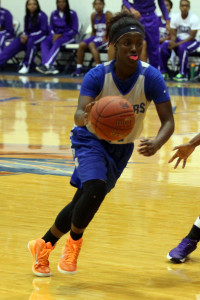 The Lady Roadrunners finished the pre-season on a high note, knocking off Wiley College 68-52 Monday night at Shands Gym. Freshman Mikayla Crockett nailed five three pointers in limited action, and the Lady ‘Runner defense displayed its typical quickness and opportunistic abilities. Even better, especially considering the length of the season, the Lady Roadrunners have plenty of filled seats on the bench, meaning head coach Byron Coleman has plenty of options at his disposal when it comes to scheming a game plan.

“Our versatility as a unit is going to be a big deal for us this year,” Coleman said. “We can play big, or we can play small and athletic. We have so many kids we can put on the court, and we can do so many things with that kind of depth.”

In addition, AC’s freshmen are showing they won’t need the entire season to ready themselves for the grind.

“Our freshmen look ready to play,” Coleman said. “We’ve been impressed with them so far; they’ve had a really good camp leading into the scrimmages.

“We thought Mikayla would be pretty good, but she showed she doesn’t mind shooting big shots. Her range and confidence are impressive.”

The one are Coleman wants to strengthen is one that just takes time to develop: Patience.

“We definitely want to work on being more patient,” Coleman said. “Knowing when to run, when to slow down, when to use four or five passes to create a shot. Those are things we’ll develop as the girls play together more.”

The Lady ‘Runners open the season Friday at the McLennan Classic in Waco, taking on McLennan at 2 p.m. before facing Temple College at 6 p.m. on Saturday.

The Roadrunners also completed their pre-season scrimmage schedule on Wednesday, taking a 109-97 win over Pro-Vision Academy. A well-rounded scoring attack saw the ‘Runners able to put up points from the perimeter (Kahari Beaufort with six three pointers) and in the paint (Trent Brinkley pounded his way to 19 points.)

Considering his group features so many new faces, Neighbors said he’s pleased with the team’s progress heading into the real season.

“The biggest thing is we showed (Wednesday) was an ability to overcome some adversity,” Neighbors said. “We 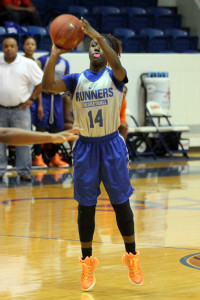 “Our guys have never played together, so nobody knows anybody yet as far as where everyone’s going to be on the floor, and how to trust each other during certain plays. We do a lot of timing and spacing, and they’ve got to learn how to do that. That’s just game-time situations, and you can only learn that during games.”

Neighbors added that having a two-week lull between scrimmages – AC hasn’t faced other competition since Oct. 10) prevented him and assistant coach Curtis Nash from seeing more of what each player can do.

“We really haven’t had a chance to monitor our improvement as much as we’d like,” Neighbors said. “It’s frustrating for all of us. “Hopefully, we learned a lot tonight, and we’ll play better on Saturday.”

The Roadrunners open the season Saturday at the East-West Challenge at Collin County College in Plano. AC plays Western Texas Saturday at 8 p.m. and Midland College Sunday at 4 p.m.

The e-mail address for AC’s Sports Information Director is gstallard@angelina.edu