A Pint For A Pint To Save Lives

On Monday, Aug. 31, the community participated in a great exchange. While giving a pint of blood to The Blood Center East Texas at CHI St. Luke’s Health Memorial in Lufkin, participants received a voucher for a pint of Blue Bell Ice Cream.

For folks like Kellie Ramsey, a photographer and graphic designer, it means two things. “It means the great Blue Bell famine is almost over,” said Ramsey, who elected to donate blood and plasma.  “But it’s not just about the ice cream,” she said, “I am helping someone else by giving and that’s pretty cool.”

With the pint that Ramsey donated, three lives could be saved. According to The Blood Center, every three seconds, someone needs blood and, while a majority of the population could give, only 5% do.

This makes the partnership between Gulf Coast Regional Blood Center and Blue Bell even sweeter. 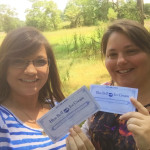 “August has always been Blue Bell Month, and we decided to do this even before we knew Blue Bell would be back on line soon,” said Tina Alexander-Sellers, Chief Diversity Leader for CHI St. Luke’s Health Memorial. “We believe in Blue Bell, we believe in this cause, and we appreciate everyone who came out to give.”
Check out Gov. Greg Abbott celebrating the return of Blue Bell in Austin, Texas.
Share
Facebook
Twitter
Pinterest
WhatsApp
Previous article
Gov. Abbott Welcomes Return of Blue Bell
Next article
The Importance of Knowing your Family Health History
- Advertisement -