Gary Stallard
Sports Information Director Gary Stallard, who also serves as a Liberal Arts Instructor, begins his eleventh season with Angelina College. Following a career as a U.S. Marine, Stallard completed his bachelor’s degree at Stephen F. Austin University, where he majored in English and Journalism. For more than 16 years, he has worked as a sports writer/columnist/photographer for the Lufkin Daily News; he continues to contribute free-lance articles on occasion. Stallard has won several awards for writing, including the Golden Hoops Award for basketball writing in 2003, Regional Sports Writer of the Year in 2004, and the Texas Press Association’s first-place award for column writing in 2007 and in 2014. He has also done basketball, football and baseball radio and live streaming play-by- play and color commentary for an ESPN affiliate. Currently Stallard serves as play-by-play broadcaster for AC basketball, baseball and softball games. Prior to arriving at Angelina College, Stallard taught English at Lufkin High School for four years. He currently teaches Developmental Writing classes at AC. He and his wife Susan live in Lufkin.
Pangelinan, Odom and Vegas Land on First-Team List

There were so many new names on the roster before the 2016 season began, Angelina College softball coaches Mark and Barbi Mattson weren’t entirely sure who their key players would be.

As the season unfolded, the entire team proved its ability to compete, with several players catching the eyes of those who vote for post-season superlatives. 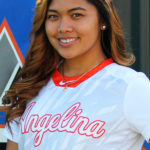 Pangelinan, a freshman from Lakewood High School in Lakewood, California, held down the left field spot and quickly proved herself a tough out, striking out just five times in 162 at bats. Pangelinan hit .454 (third in conference) with eight homers and 45 RBI. She led the team with 69 hits, 24 of which went for extra bases, leading to a slugging percentage of .724. 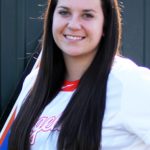 Odom (not pictured) is a freshman pitcher from Lumberton High School in Lumberton, TX. The right-hander went 20-7 on the season, finishing with an ERA of 3.36 (ninth in conference) while striking out 133 batters (second in conference) in 171 innings pitched. 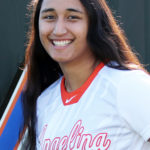 Vegas started most of AC’s games at second base. The freshman from Central Valley High School in Spokane, Washington hit .370 (among the conference’s top 20) with 10 home runs (eighth in conference) and 40 RBI. Vegas also posted a .618 slugging percentage, good enough for second on the team. 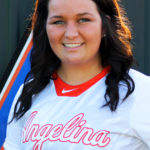 Hinkelman, sophomore catcher from Splendora High School in Splendora, Texas, finished the year with a .938 fielding percentage and was charged with just one error in 31 games. Hinkelman also threw out six runners on the base paths. 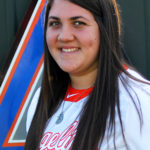 Davis, a freshman slugger from Nederland High School in Nederland, Texas, led the team with 14 homers (second in conference), drove in 46 runs (ninth in conference) and finished with a .354 batting average and a .658 slugging percentage. 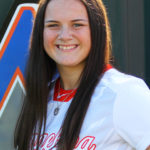 Wiggins, a freshman outfielder from Barbers Hill High School in Mont Belvieu, Texas, hit .363 (among the conference’s top 20) with an on-base percentage of .477 (the team leader) and a slugging percentage of .476. Wiggins also stole 12 bases, good enough to place her ninth among conference leaders in that category.

The Lady Roadrunners finished the season ranked 12th in the nation with an overall record of 32-18. AC opens the conference tournament against Lamar State College-Port Arthur on Thursday at San Jacinto College in Houston. Game time is 12:30 p.m.