A trio of Angelina College Lady Roadrunners earned post-season honors following the 2015-2016 basketball season, with sophomore Malachi McQueen landing on both the All-Region and All-Conference lists.

McQueen, from Leesville, Louisiana, shrugged off a slow start to the season to finish with solid numbers: She led the league in points scored per 40 minutes and ended the year averaging 13 points and 7.5 rebounds per game. McQueen also shot 75 percent from the free-throw line and dished out 1.4 assists per game; her season high was a 26-point effort against Temple College.

Caro, a sophomore transfer from Mesquite, was among conference leaders in three-point shooting for much of the season, finishing with a 35.1 success rate from beyond the arc. Caro finished with 51 made threes, including her eight-trey game against Panola College and a six-three against Paris College. Caro finished the season averaging 10.1 points per game.

AC made the post-season tournament for the 10th time in head coach Byron Coleman’s 10 years at the helm. 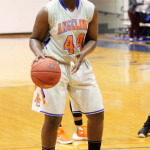 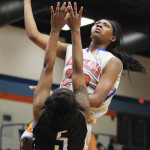 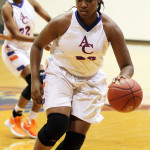