Lady ‘Runner Softball Splits with No. 1 Temple in Home Opener AC Bounces Back from First-Game Loss

Even head coach Byron Coleman could do little more than wipe the sweat from his brow following Wednesday’s crazy finish.

With AC leading by a single point at 88-87, Caro stepped to the line for a pair of free throws. She hit the first, but the second rimmed out – and Caro grabbed her own rebound, put back her miss and lifted the Lady ‘Runners to the 91-87 win at Shands Gymnasium.

The Lady Roadrunners seemed on the verge of cruising to the blowout win before the Lady Apaches began their final charge over the game’s final five minutes. Tyler’s 15-2 run included Princess Cole’s free throws with just 21 seconds to play, and Caro answered with two free throws to keep the lead at 88-85. Lady Apache Ann Nwosah converted a bucket with two seconds left, and the Lady Apaches quickly fouled Caro, who ended up creating a three-point play for the win.

LaNeique Nealey led AC with 25 points; Malachi McQueen added 23 and Caro 14 as the Lady ‘Runners moved above .500 in league play at 8-7 and 15-10 overall. The Lady ‘Runners hit eight three pointers in the game, with Caro accounting for three of those.

In Port Arthur, the Roadrunner men lost a 77-75 heartbreaker to the Lamar State-Port Arthur. The ‘Runners host Lee College Saturday at 6 p.m. at Shands Gymnasium.

AC’s ladies will have Saturday off before traveling to Coastal Bend College on Wednesday. That game tips off at 5:30 p.m.

Angelina College’s Jynelle Pangelinan strokes an RBI single to left field during Wednesday’s first game of a doubleheader against No. 1-ranked Temple College. The Lady Roadrunners dropped the opener 2-1 but bounced back with a 9-1 win in the nightcap to split the team’s home opener at Roadrunner Complex. (AC Press photo)

Angelina College third baseman Lauren Garza throws across the diamond to complete a double play during Wednesday’s opening game of a doubleheader against No. 1 Temple College. The Lady Roadrunners dropped the opener 2-1 but bounced back with a 9-1 win in the nightcap to split the team’s home opener at Roadrunner Complex. (AC Press photo) 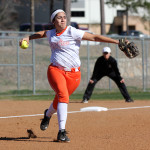