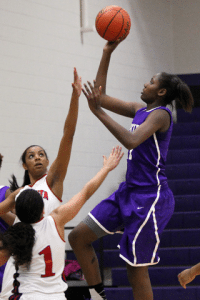 Former Lufkin High School standout Natasha Mack, shown here playing for the Lady Panthers, has signed to play with Angelina College for the upcoming 2017-2018 season. Mack was one of the nation’s top 100 recruits following her senior year of high school. (Photo by Gary Stallard)

In her four years as a Lufkin High School Lady Panther, Natasha Mack proved a fearsome presence on the basketball court. The 6’4” post did it all: She blocked or altered shots, she rebounded and she scored, leading the Lady Pack to playoff appearances

in each of her seasons.
Her play earned plenty of attention from covetous collegiate scouts, leading to Mack’s appearance in the nation’s top 100 recruits, as well as a TABC 1st Team All-State selection, in 2016. She was ranked No. 13 at her post position, according to ESPN.
Mack won back-to-back Defensive Player of the Year honors, along with earning the District MVP award.
But Mack made the decision to stay close to home, and this week, the Angelina College Lady Roadrunners announced that Mack will join the team for the upcoming 2017-2018 season.
The year away from the game only served to ramp up Mack’s desire to feel the ball in her hands again.
“I’m very excited. I missed the game of basketball,” Mack said. “Going straight from high school to Division I is very, very challenging, and I thought this would be a way to prepare myself for those challenges.”
Mack said she knows what she brings to the Lady ‘Runners’ table, but she’s willing to play any role the coaches deem necessary to help in what has proven to be one of the toughest junior college conferences in the nation.
“I know I’m expected to grab some rebounds and keep things going down low, but I’ll play wherever Coach Coleman wants to put me,” Mack said. “I just want to play, and I’ll play every position if they’ll let me.”
Lady Roadrunner head coach Byron Coleman, who’s known about Mack’s talents for years, said her addition will provide a huge boost in lifting his team to another level. Coleman’s teams have reached the conference tournament in each of his 11 seasons at
the helm, and having a player of Mack’s stature – combined with an impressive incoming class – could make a huge difference.
“We feel like Natasha can be a game changer for us,” Coleman said. “We’re talking about one of the top 100 players in the nation coming out of high school. This is the first time in a long time we’ve had such a highly ranked player. She’s a D1 dream.
“We feel she can anchor our defense and change our defensive philosophy. Offensively, she’ll give us a threat who can either play with her back to the bucket or face up to the bucket.”
On Thursday, Mack met some of the players, and Coleman said the team is anxious get started on the season.
“As soon as school starts and all our players are here, she’ll be able to work out and see what we’ve got with the rest of the kids,” Coleman said. “We’ll be able to position our players based on what she can offer us.
“I think she’s ready to get back on the floor, and I know we’re ready to see her.”
The e-mail address for AC’s Sports Information Director is gstallard@angelina.edu.