Angelina College head men’s basketball coach Nick Wade and assistant coach Zac Kircher had plenty of reasons to feel proud about their first seasons on the bench at AC, but what occurred after the season may be their biggest bragging point yet.

Five Roadrunners graduated and signed to play at the next level, testament to the effort the coaches and athletes put forth both on the floor and in the classroom.

Norman was the Roadrunners’ leading scorer and a 1st Team All-Region selection in 2018-2019. Janacek shot 35.3 percent (65 of 184) from three-point range in 2018-2019, and Prevost averaged nearly a double-double despite missing time with injuries. Jackson and Stevenson provided valuable minutes off the bench as the ‘Runners finished 18-14 with a No. 2 seeding in the Region XIV conference tournament’s Eastern Zone.

Three of the players signed their letters of intent back in May. Wade commented then on the quality of people and players those new organizations are getting.

“First and foremost, those are great individuals and human beings,” Wade said. “They’ve been raised right and come from great families, so I don’t worry about them. Sometimes coming to a junior college program is just about being tough and figuring things out about yourself you may not know. It’s not for everybody, and those guys definitely withstood the test of time.

“They’ve been coached hard, and they know how to compete. They’ll play to the best of their abilities, and they’ll be great teammates and students. That’s all we can ask of them.” 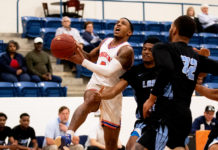