The bill filing deadline has come and gone, the first major proposals have passed through the House, and thousands of bills are being lined up for debate in committees and on the House floor. The pace has picked up tremendously, causing many lawmakers and staffers to agree that this is indeed March Madness. Here’s a look at what’s happening at your State Capitol…

First Bill of the Session

Joining me this week in Austin as I presented my first bill before the House Insurance Committee was Constable Tom Selman from Angelina County. Constable Selman testified in favor of the proposal, House Bill 533, which seeks to assist both local and state law enforcement officers by giving them additional tools to use in dealing with uninsured motorists who are in violation of state law, including the option to tow. The law enforcement community in our district has let me know that this bill would enable them to more efficiently and effectively perform their duties, and I am always proud to stand with these brave men and women to ensure they have the tools necessary to keep us safe.

Two major pieces of legislation made their way out of the House this week. House Bill 10, which passed unanimously, would create a Child Sex Trafficking Prevention Unit in the Governor’s Office. Additionally, the bill would make it easier to prosecute those who force minors in to prostitution. Later in the week, we passed House Bill 11, which would enact a comprehensive border security plan that includes hiring additional DPS troopers to be stationed along the border, creating a Reserve Officers Corps of former and retired officers, moving checkpoints closer to the border, and establishing a multi-agency intelligence center in Hidalgo County. Additionally, the bill calls for an increase in penalties for human smuggling and requires DPS to study the usefulness of southbound checkpoints within 250 yards of the border to screen for guns and illicit cash headed to Mexico.  I am proud to have co-authored this proposal which passed overwhelmingly (131-12) on a bipartisan vote. As I have stated, Texas will not stand idly by while the federal government does nothing and ignores their responsibility to secure the border and keep our citizens and communities safe.

District Director Linda Parker is wrapping up our mobile office for the month on Wednesday, March 25th at the San Augustine County Courthouse from 8:30 a.m. to 11 a.m. She will continue the mobile office in April. 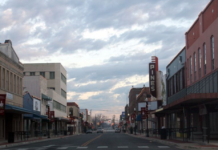